If you’re unable to turn on your Apple Watch, don’t worry, we’ll tell you how to fix it. Many people nowadays have been facing this issue. You may face this issue due to hardware or software problems.

However, it would help if you didn’t do out of the ordinary to make things even worse for you. Instead, read this blog to fix the “Apple Watch won’t turn on” issue.

Part 1: How to Fix Apple watch Won’t Turn On

If you’re facing the my Apple Watch wont turn on issue, you don’t need to panic. Instead, you only need to restart your Apple Watch to test whether this procedure improves things or not.

If you’ve also done the same thing, you need to remember that enabling Power Reserve mode means you’re turning off every feature of your Apple Watch except its current time.

To fix this issue, you’ll need to press and hold your side button for a few seconds before you see an Apple logo option there. After this, you’ll be able to turn off the Power Reserve mode. 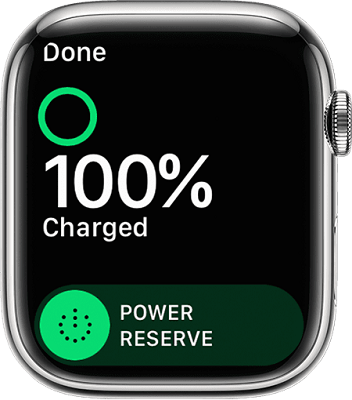 3. Turn Off VoiceOver and Screen Curtain

After implementing a couple of critical solutions, if you’re still struggling with “why wont my Apple Watch turn on” then the problem is somewhere else.

To get rid of this unwanted situation, you’ll need to turn off the Apple Watch’s Screen Curtain mode. Follow the guide below to get your job done.

Moreover, you should also turn off the VoiceOver because the VoiceOver causes the Screen Curtain to appear. You can turn it off following a few simple steps. 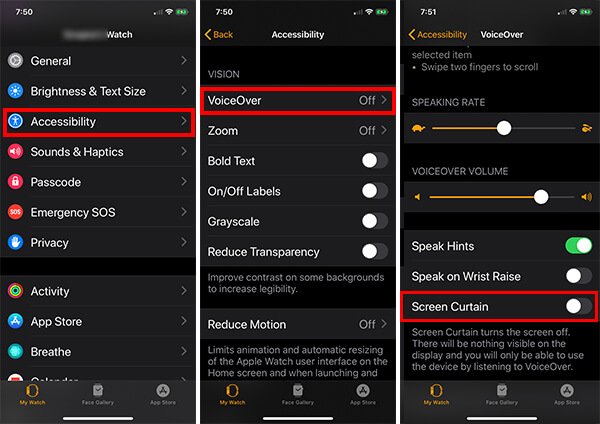 4. Change A Cable or Charger to Check

Sometimes, we don’t pay attention to small things that end up hurting us big time. Similarly, before going for an extreme step to fix Apple Watch won’t turn on after being dead issue, you need to check the condition of your charging cable.

To check whether the problem lies in charging cable or not, you need to start charging the Apple Watch using multiple wires. If you notice that one particular line doesn’t charge your Apple Watch, it is not difficult to assume the root cause of your problem.

You can also try changing the Apple Watch’s charger to reassess things. If you still face the same problem despite changing the charging cable or charger, look around for other solutions.

5. Erase Your Apple Watch and Pair It with iPhone Again

If nothing changes the situation, you can try removing the pairing of the Apple Watch to your iPhone. This process can help you solve the fuss you’d be facing. Follow the instructions below to put things in order. 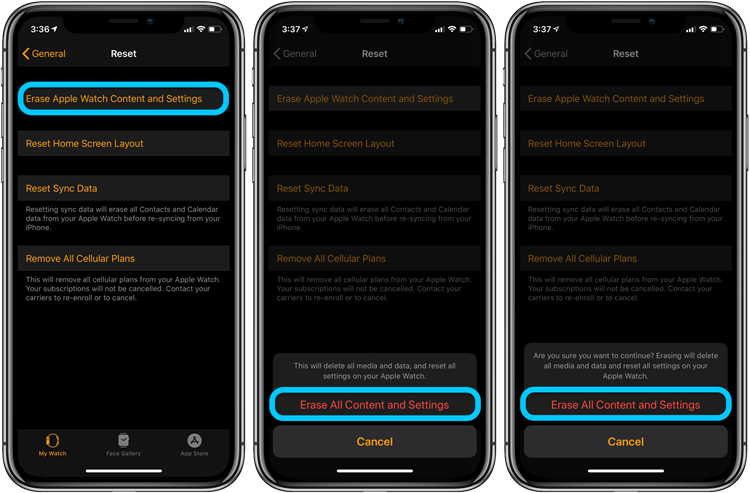 If any of the above-explained worked in your favor, there are strong chances of your Apple Watch affecting some hardware issues.

Your battery might need a replacement, or something else needs to be addressed. Whatever the things are, don’t do too much with your Apple Watch.

Instead, you need to consult the worthy Apple Watch repair center. After connecting, you need to let them figure out the causes of the issue you’ve been facing for so long now.

They’d have indeed got some experience and a seasoned technical team to solve the problem no matter how much effort it demands from them.

Part 2: What If Your iPhone/iPad/iPod Touch Won’t Turn On

Using StarzSoft Fixcon, you can fix every iOS device problem with minimal effort. Moreover, if you’re facing an issue with your Apple Watch, Fixcon is pretty capable of fixing that issue as well. Here’s the guide to get your job done.

1. Why is my Apple Watch screen black and won’t turn on?

After charging your Apple following the instructions, if you’re having an issue turning it on, it might be due to Power Reserve mode.

If you’ve turned on the Power Reserve mode, it prevents your watch from running correctly. To fix this problem, you need to press and hold the side button of your Apple Watch. This process will restart your Apple Watch again, eradicating the problem you were facing previously.

2. How long does a dead Apple Watch take to turn on?

If your Apple Watch is dead and isn’t turning on, you don’t need to panic. Instead, it would help if you put the Apple Watch in charge.

After putting it in the charger, you need to wait for a couple of hours. During this time, your watch is most likely to restart again once the battery is charged.

3. What happens when your Apple Watch does not turn on?

If your Apple Watch doesn’t seem to be working correctly, you can’t enjoy its features then. But, you don’t need to feel wrong about it. Instead, restart it again or put your Apple Watch in the charger to get things sorted out.

Following the solution we’ve explained in this blog, you can fix the “Apple Watch not turning on” issue. First of all, you’ll need to analyze the problem and then execute the solution, whichever you’d wish you use.

However, if neither of the solutions worked, get the services of StarzSoft Fixcon. It is a monumental third-party tool designed especially for iOS device issues. Using this tool, you can find a way to fix Apple watch-related matters.