YouTube announced the picture-in-picture that helps you to work on different things on your iPhone while playing a YouTube video. Unfortunately, many people find it hard to use this feature. Luckily, we’ll help you eliminate the “YouTube picture in picture not working iPhone” issue.

Part 1: The History of the Google YouTube PiP Feature

YouTube introduced the picture-picture feature on March 10, 2021, and iOS users who had iOS 14.5 could use this function.

On November 29, 2021, an update made the YouTube TV users use the Picture-in-Picture feature on their iOS devices. However, Google denied these speculations officially, and hence there was no official justification for this update.

On April 12, a new update came, claiming that YouTube had removed the PiP feature for iOS. Only YouTube Premium users were eligible to use this function.

Part 2: What to Do When YouTube Picture in Picture Not Working iPhone

1. Use Vinegar on Safari When Youtube PiP Not Working iPhone

Vinegar is the extension of Safari that helps you use Picture-in-Picture mode on YouTube. However, you’ll need to install the Vinegar app from App Store to begin the proceedings. Here’s how to do it. 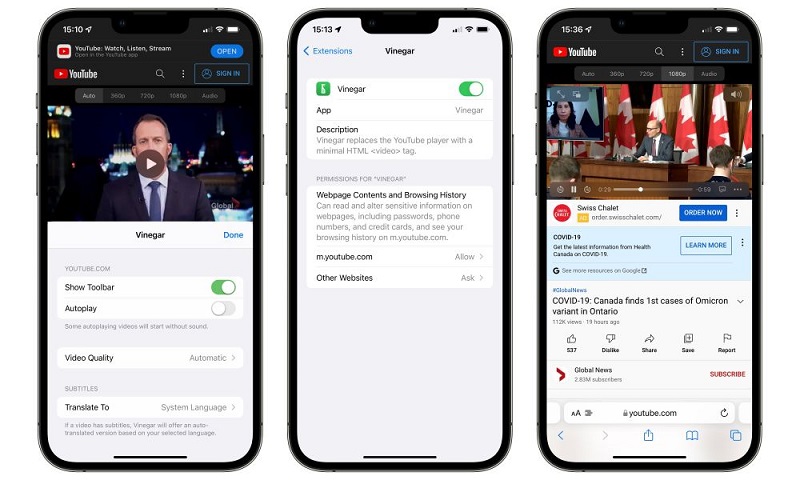 2. Use Shortcuts If Your Youtube Picture in Picture Mode Not Working

You can also make YouTube picture-in-picture mode work via the YouTube PiP shortcut. For this, you’ll need to get the Shortcut app downloaded from the App store. Here’s how to do it.

3. Use PiPifier to Make PiP Working

If you’re facing a YouTube picture in picture not working iPhone issue, you can fix it via the PiPifer app. Using this app, you can enable picture-in-picture mode on your device.

All you need to do is install the PiPifer app from App Store. After installing the app, you’ll need to follow the on-screen instructions to enable picture-in-picture mode on YouTube.

You can use Picture-in-Picture mode on Chrome if you cannot run it on YouTube.

Part 3: How to Fix iOS Glitches When YouTube PiP Not Working

If you cannot run Picture-in-picture mode on YouTube, the issue might be with your iOS device. Hence, it would help if you looked to restore the iOS device via StarzSoft Fixcon. It is a mammoth third-party tool that helps you eliminate 150 iOS issues. On top of that, it doesn’t cause any data loss, courtesy of the unbelievable Standard Repair Mode of Fixcon.

In addition, you can also put or get out of your iOS from Recovery Mode as it tends to perform multiple operations on your iOS device.

Part 4: FAQs about Picture in Picture on iOS

1. Why is picture-in-picture not working for YouTube on iPhone?

YouTube had disabled the experiment of using picture-in-picture mode, but now YouTube has claimed that premium users can use this feature. If you cannot run it on your iOS, there can be several reasons behind it.

First, you aren’t a subscriber of YouTube. Second, your iOS device is facing and that, as a result causing the issue you’re facing.

You can use Picture-in-Picture mode on your iOS through various means. However, you’ll need to ensure you’re a YouTube subscriber, as YouTube doesn’t allow the non-subscribers to explore picture-in-picture mode.

Yes, you won’t be able to use YouTube picture-in-picture mode if you didn’t acquire the YouTube Premium.

If you want to enable PiP on YouTube iOS, you’ll need to opt for Vinegar on Safari, PiPifer, Chrome, and Shortcuts.

YouTube enables those people to use Picture-in-Picture mode who are premium subscribers of YouTube. However, after reading this Guide, you’ll be able to use the PiP feature through others means.

However, if you face a “YouTube picture-in-picture not working iPhone” issue, you can opt for StarzSoft Fixcon, which might help you fix the iOS device issue.

Home > iPhone Issues > Youtube Picture in Picture Not Working iPhone? Learn the Step by Step Ways to Use It Here